mother! hates you. Sorry to say it, but mother! really fucking hates you. mother! hates that you’ve come unannounced; mother! hates that you’ve the audacity to smoke in her house. mother! hates the way you carelessly dangle your vodka-lemonade and presume you can pry into her sex life. And even though mother! hates that you sit on her sink, and steal her husband’s attention, and do baffling shit during parties like paint her archways and execute hostages on her floor, what mother! really hates the most about you is that you are a human, a climate-razing mooch, a bacchanalian fanatic that can’t even handle his liquor. mother!, above all, hates you because you are an idiot, an illiterate goon, and even if you aren’t, even if you can say, “hey, mother!, I get you, I get it, what you’re trying to telegraph isn’t the stuff of obscure theology, or, frankly, even an 8th grade English lesson on The Faire Queen,” mother! is not going to trust you, and no matter what pleas you levy at the screen, no matter what chances you stake her, mother! is always, and forever, going to treat you like a total ignoramus.

And right back at her; I fucking hate mother! too. Don’t get me wrong: I think at times she’s brilliant, a psychopathic one-of-a-kind; a visual feast; a surreal bonanza of time-distortion and frenzy. But mother! punishes me for ever, at any time, thinking that she was subtle, or that the parable she was stringing along was referentially shrewd. In this way mother! betrays me, and so makes me the fool she thinks I am. For that, mother! can go fuck herself.

When did Aronofsky start equating literary seriousness with Biblical profundity? It’s clear that mother! is a retelling of the Christian conception of history, amended for some contemporary anxieties like overpopulation and global warming. All the hits are there: Adam and Eve’s deception in the garden; Cain’s murder of Abel; Noah and the flood; the birth of Christ; the crucifixion of Christ. But because these reenactments are dressed up in a Rosemary’s Baby-styled horror show, we initially take them at their psychosexual face value. We follow along, benefit of the doubt in tow. It’ll be a pure experience, we tell ourselves. Maybe we’ll get the unmoralized nightmare of Requiem for a Dream. God, if we’re lucky, we’ll get the poetry of The Wrestler. 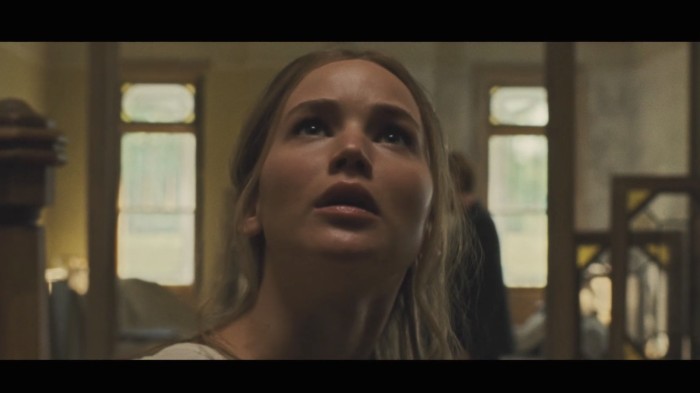 Nah. What in the hell were you thinking? You’re delirious. You’re on the same shit as whatever Aronofsky is mainlining. And like a babbling junkie, mother! too doesn’t know when to just shut the fuck up. Halfway through the film’s central phantasmagoric sequence, a fever dream so well executed its apocalyptic terrors are not just earned but enraptured, the sense slowly overcomes you that uh oh, this is still going on, isn’t it…we’re…we’re about to get a lecture, aren’t we? You sure are, Balthasar! And if that wasn’t enough, the sermon that eventually does get shoved down your throat is so ham-fisted that, as a vegetarian, I began to vomit profusely.

Performances? There aren’t any performances. I’m still unconvinced this wasn’t an elaborate puppet show. I guess I could talk about its generic awareness, the savvy way it weaves setting and scares to dignify horror’s lower pleasures, but I’d be abetting a crime; for the film itself is a scheme, a fireworks display designed to get you looking up at the dying night, so it can cleanly kick you in the balls, then spit blood at your eyes.

I don’t know man, I’m exhausted from thinking. I feel like I owe more words, but I’m afraid too much exposure to this poisoned Nile and I’ll start shrieking like Alex Jones, were he there when God roared at the Pharaoh and plagued Egypt with gay frogs. Should you see this movie? Of course, you should; stop being so dense. You’ve never explored such a life-abounding world of frustration before. Aronofsky brags in his director’s statement, “All of my previous films gestated with me for many years but I wrote the first draft of mother! in 5 days.” But I mean, Jesus Christ, slow your roll: you’re trying to remake all of creation here. Good grief. Even father! took a week.