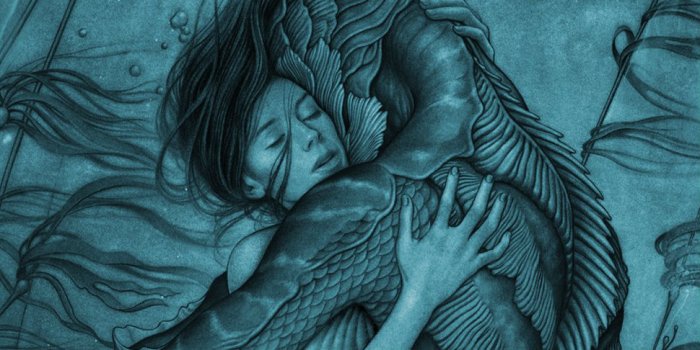 Guillermo del Toro is back after the unenthusiastic reception of his previous film, Crimson Peak. His career seems to be haunted by the ever-echoing achievement of his obviously greatest film, Pan’s Labyrinth; like the work of other artists who have been unfortunate enough to catch lightning in their bottle, his following films have all been cursed to be judged by one chimerical metric: whether or not they are a “return to form.”

But, you know, has he finally made that film? There at least appears to be an attempt. The premise is similarly a fairy tale of sorts: a mute woman, played by Sally Hawkins, secretly befriends a monster who is treated inhumanely at the facility where she works as a janitor. She conspires with her gay neighbor (performed modestly by Richard Jenkins) to set him free; somewhere along the way, she falls in love with the creature, and from there it doesn’t take a genius to predict the narrative beats.

Of course, with a film like this, we aren’t so concerned with the narrative as the execution itself. The film takes place in Baltimore in the 1960s, and del Toro’s interpretation of the era is fresh. There’s no free love in the air here, no acoustic strumming or Beatnick rhapsodies. Instead, the atmosphere is dreary in its whimsy, mildly Burtonesque even. It’s not exactly as dystopian as Richard Ayoade’s The Double, but the set pieces have had the life sucked out of them all the same.

And this is by design – the thematic backdrop for this misunderstood-monster romance is the hatred of the 60s: racism, homophobia, misogyny. The greatest nightmare of all is the nostalgia for torturous times, and del Toro does something cinematically useful by lending his dark touch to this period.

But short of Sally Hawkin’s and Michael Stuhlbarg’s unsurprisingly stellar performances, the film is otherwise, in my mind, a flop. Talent is undoubtedly wasted here. Michael Shannon plays the villain, but where you might expect del Toro to encourage Shannon to delve into the creepier qualities that make him magnetic as an actor, all you get is, what’s at this point in his career, a by-the-numbers performance. Similarly, Octavia Spencer reaches for the stars, bravely daring her soul to play the role of the sassy black sidekick.

However, the most egregious misfire in the movie is the romance itself. It’s not even something as tactless as how often the film smacks your head with its dialogic baton, trying to beat the sense into you that, duh dummie, the monster is a metaphor for societal phobias. It’s something much more ethically dubious, a concern that makes me question whether del Toro has ever even been in love before.

Since Hawkins’ character is mute, she communicates with sign language. So, upon meeting the monster (who at the beginning has no means for verbal communication), Hawkins starts to teach him speech by signing words – at first, she signs the word “egg” as she gives him an egg, he repeats the sign, she becomes delighted at his reciprocation, she signs a new word and so on. We get two scenes of this and something of a montage before she pleads to her neighbor to help her free him, since the monster sees and understands her in a way that no one has before. Hawkins acts the shit out of this scene, so much so that you basically believe her.

But it’s not as if by this point she and the monster are exchanging vulnerabilities, talking deeply about their deepest dreams and fears. In fact, there is no evidence throughout the entire movie that their linguistic universe is larger than 10 words. For reference, my dog responds to roughly 10 commands. And though I love my dog completely, I would have to be a seriously diseased person to think he understands me in a way that could set the stage for a romantic relationship.

If that’s not concerning enough, consider that the monster’s behavior isn’t one that resembles a silent but nonetheless matured adult: he’s more like a bumbling child, or a loyal pet. Once Hawkins secures him in his apartment, he eats a cat and runs away. When Hawkins retrieves him again, he shows off how his skin can glow and then tries to fondle her breasts. She resists at first, but then, well, she fucks him.

By this point, we are supposed to solidly believe that these two are in love. The characters do at least. When she tells her cohorts in crime that she has done the deed, they essentially laugh it off as a “weird, but I guess it makes sense” scenario. When Jenkins later opens a door to accidentally catch the couple in the act, he leans his head on the frame, admiring the lovemaking.

In terms of cinematic ethics, this troubles me. Language is essential to, if anything, consent. As a society, we don’t ascribe the capacity to consent to lifeforms such as animals or children precisely because their linguistic abilities aren’t developed enough. And seriously, there was more inter-species communication in the Koko the Gorilla documentary.

At best, it’s just an unconvincing romance. But I really suspect that at its bones, this is a bittersweet story about the joys of molestation. Which would have been fine, intriguing even, had the film in any imaginable way addressed it. But in its folkloric ambitions, it flamboyantly skirts by this conundrum in a blazing moral blunder. And a blunder it is: if the monster really does represent our unrighteous social fears, but its speech and behavior represents the intelligence of a child, what exactly are you saying about oppressed minority classes?

The significance of the film’s title is revealed in the end – love is like water that you cannot see, but submerges you, shapes to you, and surrounds your body entirely. Sadly, the movie itself is a shallower experience. In fact, you know its shape. You’ve seen a puddle. I’d skip over it.