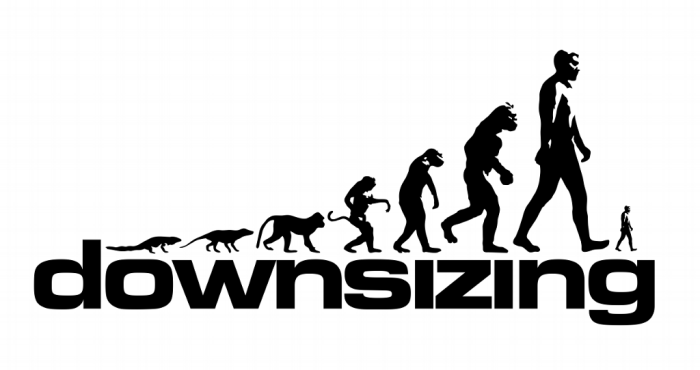 Were I to tell you that I had just seen a science-fiction movie starring Matt Damon that was about the environment, class politics and healthcare, I’d forgive you for thinking I had just watched Elysium. But no, last night I had the pleasure of watching Downsizing, Alexander Payne’s new and most ambitious movie to date. I’ll be brief with my impressions as I don’t want to spoil too much about this surprising film, but it was so unexpected in so many ways that I feel obliged to make a few comments.

Make no mistake, this is Payne’s most overtly political work. Right off the bat we are introduced to the innovative medical technique of “downsizing” at a conference titled “Human Size and Sustainability.” The idea is that if we were to become miniature versions of ourselves, we could drastically decrease the amount of waste we produce – and in doing so, curb the effects of global warming before we reach an apocalyptic tipping point. The world is rightly amazed at this scientific achievement, and in 15 years’ time, roughly 3% of the population has undergone downsizing.

If you’re familiar with Payne’s filmography, this sort of high-conceptual conceit seems completely off brand. But it is exposed to us with such gleeful self-awareness of its own absurdity that it’s clear he isn’t actually asking us to take this premise seriously. And then just immediately after this effortless exposition, we are brought into a universe of people that is typical for Payne: white, suburban, ordinary, unassumingly tragic. Matt Damon plays an earnest, wide-eyed occupational therapist whose fascination with downsizing spurs on his own mid-life adventure. From here are delivered plot points that feel both familiar and inspired, and as an experience it peculiarly squares alongside The Descendants and About Schmidt. 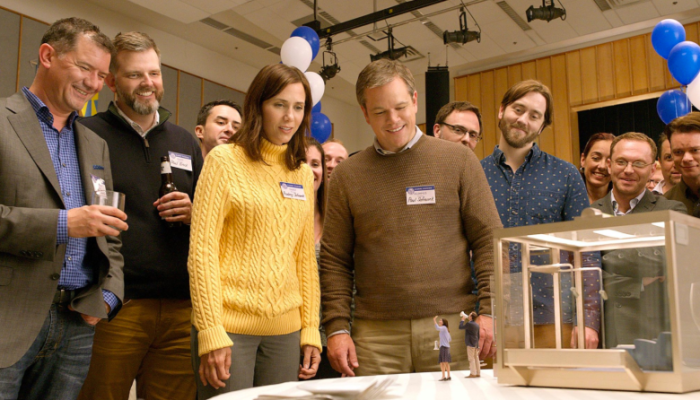 The “downsizing” procedure as a narrative device has its problems though. As quirkily and amusingly as Payne treats “downsizing,” often making jokes à la Gulliver’s Travels about how objects are transformed in a world that both big and small people inhabit, he still wants to use “downsizing” as a way to say serious things about class and consumption. If people were made small, would their lesser contributions to the economy create widespread financial failings for those who stayed big? In that case, should small people have as much voting power as the bigs? Could autocratic governments use “downsizing” as a weapon to punish dissidents? Would people actually downsize to help the environment, or mostly because decreasing your consumption would make you wealthy beyond your wildest dreams? These are all questions that are asked explicitly, and were they to be answered in any meaningful way, it would make for a philosophically satisfying science fiction movie.

But Payne isn’t making a science fiction movie, at least not really, so he only has time to pose these questions, not flesh them out. The real story, it turns out, is hardly any different in shape than the one he told in Sideways: a man battles his own mediocrity to find himself and love. In fact, this story is so independently told from its setting that on reflection, the namesake premise appears to be a needless gimmick.

And yet, perhaps it’s not, because it invites you to think in magical terms about the everyday humaneness of these characters. Damon’s character may be predictably wallowing in despair, but that doesn’t stop him ever from being a curious and compassionate person. And Hong Chau, whose charmingly stereotypical performance surprisingly becomes the movie’s emotional soul, plays a character who, despite unimaginable personal tragedy, still devotes her life to the less fortunate. This is a film about, in the face of both heartbreak and extinction, the greater magnitude of hope. Of course it doesn’t matter how little you are.

Beyond that, I’ll say that Christoph Waltz plays a one-dimensional character whose role feels perfunctory – I’m not sure why this guy can’t find a role suited for his talent. Kristen Wiig gives a mostly naturalistic performance, but at this point we already know that’s something she can do. Lots of cameos. I enjoyed how unforced a lot of the set pieces felt, since this is the kind of movie where the mise en scène can start to get your eyes rolling. The environmental commentary is going to feel too on-the-nose for some people, but considering the crisis in Houston and that I was watching the film in Venice, the blunt polemics about climate change were not unwelcome.

In other words, I recommend it! Something of a departure for Payne, but even so it was an honest and heartwarming experience. Very excited to see The Shape of Water tonight.