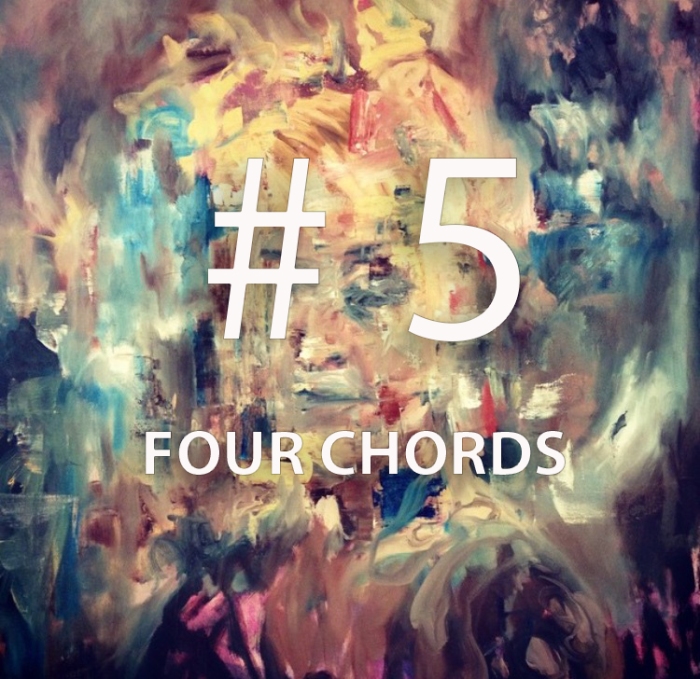 songwriting is dangerous. like any other obsession, it becomes your primary prism through which you interpret your whole life. but because music is dramatic, you can end up allowing yourself to enter into precarious situations that you otherwise wouldn’t, were you not on the hunt for a good lyric.

that’s what this song is about in a nutshell. as what is clearly becoming a theme in these posts, i was in a toxic relationship – one i would have probably had the better sense to leave, but couldn’t help but stick around because it set my music on fire.

like lots of people, i learned how to play guitar by teaching myself how to play songs from pop-punk bands, like blink 182 and sum 41. so many of these songs revolve around a really simple theory of chord progression: limit the chords you pick in the scale to among I, IV, V or vi, and arrange them in some pattern of 4. so for instance, “dammit”’s verse looks like C G Am F; “the quiet things that no one ever knows” Is G Em C D; “cute without the e” has C#m A E B; the list never ends really.

when i go down to write a song even today, i start with this paradigm. that’s not something i’m particularly proud of, but i write pop songs and it’s a useful place to start. that’s where i started with this song, but when i realized i wanted to write a song about songwriting, then i knew i wanted to play with that approach a little.

i decided that i wanted to change the set of chords i could choose from. so i took out V chord (which is my least favorite chord for whatever reason) and added in the ii and iii chords.

the way i added in the iii chord is probably the most insidious. the verse starts typically for one of these kinds of songs: it begins with F# B D#m. but from here, you would either expect it to drop to the C# (V) or back to the B (IV) again (“talking ‘bout a revolution” would be an example of the I IV vi V you might expect — i know it’s off-genre, but there was only so much good charlotte and new found glory i could listen to just to try and make a point). instead, here is where i switch to the iii chord. the iii is a minor chord too, so not only are expectations being teased, but it’s being done with a chord that is typically sadder and more brooding than the ones we expected. this is a musical way of suggesting that the lyrics, despite seeming pleasant at first, aren’t going to be telling a happy story.

the chorus is a little less about paradigm-shifting, and more just about formatting a progression that thematically fits with the lyrics. the first half of every chorus is IV iii ii I: this is where we introduce the ii chord, and we do it so our progression is made of chords that directly descend down the scale (as 4 3 2 1 would entail). likewise, the first half of every chorus lyrically is describing some pessimistic situation: “i felt the trouble..”; “you feel so confined”…; “you can’t help but kill your time…”. as such, the descending progression is form-and-function with the lyrical dejection.

the 2nd half of each chorus trades out the I chord with the initial IV chord, so instead of completing another descension, it’s as if against our expectations, we are being brought completely up again. this is a musical representation of hope, and it makes sense with the hopeful lyrics that close out each chorus (“thought it’d be alright”, “i still think it could be alright”, “i really think you’d be alright”).

the actual instrumentation is almost entirely a nod to these older pop-punk songs that taught me how to write music. the guitars are slightly distorted; the drums are loud; the vocals are sloppy; the bass guitar is whatever. there’s an organ in there for atmosphere, but otherwise it’s pretty much typical pop-punk instrumentation.

I feel it all the time.

I had to organize.

i repeat “four” in the first line to, well, underline the repetitiveness of these kinds of four chord songs. the second time, when i say “four/four scored” is to pick out the time signature these songs are most always scored in. “i had to organize” is just a way of saying music was a way i was able to make sense of life, and so i went with it.

In the canal, it gets pretty blue.

A factory yawns clouds of soot.

Lounged in our kayaks,

I’m not all here with you.

i used to go kayaking in the gulf of mexico with my dad a lot. when you get out of his canal, there are a bunch of factories you can see on the coast. i learned later they aren’t actually blowing out soot (it’s steam), but whatever, it’s still a really unfortunate sight when it distracts you from all the surrounding natural beauty.

and in that way, i’m using it as a metaphor for how songwriting is a distracting passion. life can be beautiful, but i’m never really in the moment. it’s hard to be present when you are trying to figure out how to transfer that beauty into a song. and that’s kind of ugly.

I felt the trouble —

I felt it double when you said

Don’t be so kind.

I know how the words mean

More in a melody,

But when I did it,

I really thought it’d be alright.

this is just straight up taken from real life. when i wrote the first song i would write for my girlfriend, she told me it was too sweet and sincere, and that it made her uncomfortable. that surprised me, and hurt me, but in a way it sort of reaffirmed my passion for music — even though the lyrics to that song were typical phrases of affection and nothing i hadn’t said to her in real life, it was still too overwhelming to take in song form. in someway that must mean the music was powerful.

and yet, her reaction was just troubling.

I keep an absent mind.

more of the same: i’m distracted; it’s good to have a system to your life.

I tried to capture you with respect,

But you resent the arrogance.

The little things have

building off the 1st chorus, here i’m detailing the ways in which my girlfriend was uncomfortable with my songwriting. instead of appreciating the way i try to record the things i love about her, she resents the fact that i think i can “capture” anything about her at all, as if i’m saying that i only really see her as fodder for material. and maybe that’s true, and that would be horrible, but it’s also deflating my sense of the world. and since i can’t cherish the details of our life in the only way i know how, “the little things have/become little again.”

You feel so confined.

You can’t open the wine

And all these tonics take my mind.

But when you said that you loved me

I thought I heard you humming.

I still think it could be alright.

the first part of this chorus can be explained by the fact that we drank a lot. the word “tonics” here has a double meaning: tonic water is obviously a mixer in cocktails, but a tonic is also the first note of any scale. so it’s like drinking and making music is a way of escaping this relationship.

one of my favorite lyrics i’ve ever written is “when you said that you loved me/i thought i heard you humming”. it’s not particularly complex or anything, i just enjoy the simplicity of it, the way it it easily sums up the essence of the song’s drama, and posits that there could be anything dramatic at all about a person humming. a way of saying “if you don’t interpret the world through music like i do, that’s alright, but damn it was magic when i thought you did”.

Life lived as a lie.

they say art is truth. but if your way of living life is just a means to make music, aren’t you just sort of living a lie? the drums come off a bit here and we’re in a moment of meditation — is this something i can oblige anymore?

You tried to find change in your pockets,

Your fingers dressed in amethyst;

Will ever make much sense.

i remember my girlfriend always acting like she had no money, even though she had this expensive amethyst ring. it’s not like i was expecting her to quit her bullshit because she could always sell her ring if she was so broke. but then, why was she wanting me to “change” my nature? her sense of fairness seemed wrong to me, and it was one of the many things in the end that led to our hating of each other.

When you think at the ceiling,

You can’t help but kill your time.

But you know, fuck the theory.

If you played it, I really think

maybe music is a waste of time? i doubt i had the choice. and maybe it’s ok to make bad choices, because what comes after can be hard and breathless, and maybe you’re supposed to deviate from the theory, musical or otherwise, because it’s just a theory anyways, and then if you played life, like i did, you’d have seen yourself, the way i did — ultrasonically — and you might have liked it.

maybe, maybe. but we still wouldn’t be together.